In CCLM, communities meet with their cultural practices in a free and open exchange of ideas. We believe in the power of debate and cultural vitality. We work to build meaningful relationships that strengthen and deepen the ways we see ourselves. Considering all sensitivities. We seek to challenge our audiences through emotion and knowledge. We believe in dignity and good living and that is why we work for harmony here. We have the task of creating a dynamic and habitable space. At the centre are inspiration, action and impact.

In this building, located in the civic centre of Santiago, arts and cultures are displayed through a multidisciplinary approach in 4 galleries and 2 large rooms, which offer programming for all audiences. The movie theatre at CCLM showcases fiction films, short films, documentaries and animation from the Cineteca Nacional, which also safeguards and restores Chile’s audio-visual heritage.

This 7,200-square-meter building – work of the architectural office Undurraga Devés – also houses the Espacio Whipala and the Espacio Lector Abierto, meeting and exploration spaces that invite reading, being and inhabiting.

A meeting place of different view

Here we promote perspectives that broaden the areas of knowledge and give visibility to the environmental crisis. At the Cultural Centre people and the environment are treated with dignity, care and respect. The human being exists in relation to the Other and nature. Here we incorporate the sensitivities and knowledge of the territories, natural heritage, ecosystems and biodiversity. We contribute to the advancement of society towards a commitment to diversity. Our intention is to explore, understand and appreciate our differences. Here we strive to become a green centre with sustainable practices and a circular economy in the future.

Here we work so that dialogues between cultures are horizontal and equitable. The priority and urgency of the Cultural Centre is placed on the participation and recognition of the peoples. At the core of the Cultural Centre are the first inhabitants of the territories. We seek to honour those who have been displaced and crossed out of official history. We know that cultural actions transform societies and here, we work for that.

Past, present and future meet here. We invite you to reflect and re-signify the heritage, memories and knowledge that build the identities of the communities. This is an inspiring space that expands the way we see and understand each other. Horizons are expanded and challenged here because, at our core, we include multiple perspectives. At the heart of the Cultural Centre is the human being and nature. Here everything intersects. We know that there are as many heritages as there are people and cultures. 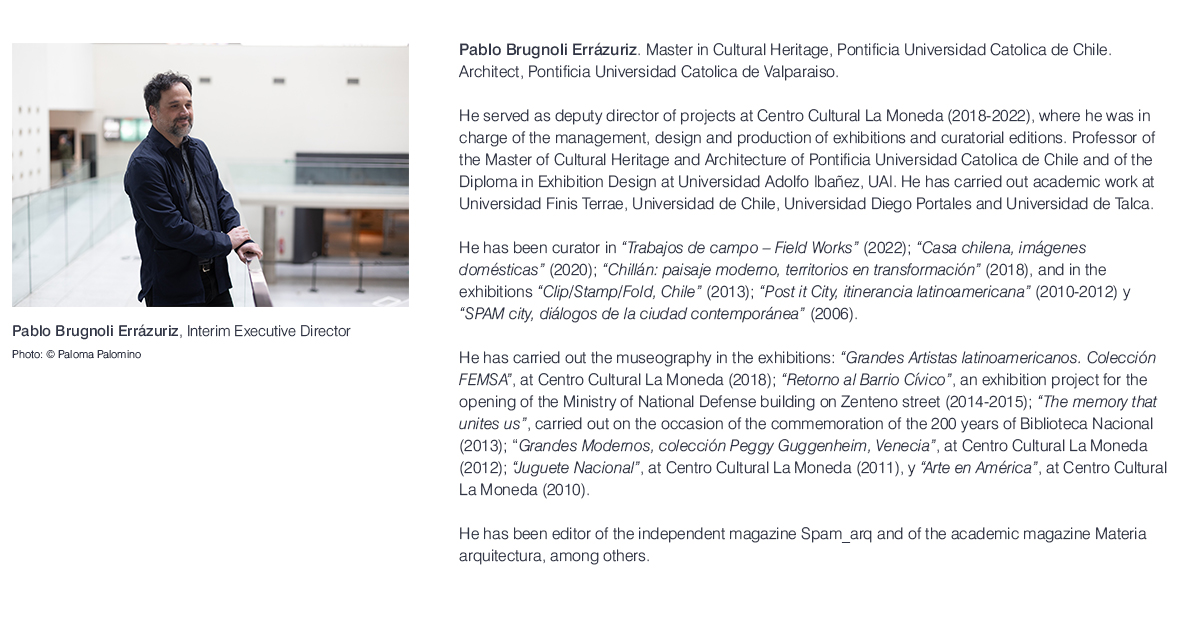 The team at Centro Cultural La Moneda is comprised of an interdisciplinary group of professionals and technicians. Distributed across the Projects, Education and Outreach, Marketing and Development, Cineteca Nacional and Administration areas, they are the ones responsible of enabling the cultural experiences offered by this space to materialize in order to welcome our visiting audience in the best way possible.

The functions of the Advisory Board are directly related to ensuring standards that operate globally in cultural organisations through partnerships and collaborative work with the team at Centro Cultural La Moneda. The purpose of the Advisory Board is to reinforce the international ties of Centro Cultural La Moneda, in addition to ensuring that its activities and programme respond to the highest standards for cultural institutions.

The Advisory Board consists of

Camilla Carlberg (Sweden) Curator and Head of the Department of Education and Public Programmes at Moderna Museet, Stockholm, where she specializes in contemporary art and performance, developing and implementing programmes for the expansion of audiences.

Ticio Escobar (Paraguay) Curator, teacher, art critic and cultural promotor. He is currently the Director of the Visual Arts Centre / Museo del Barro in Asuncion and President of the Carlos Colombino Lailla Foundation.

Beatriz Espinoza (Chile) Bachelor of Visual Arts, craftswoman in ceramics and Master (c) of Art Theory
and History. She is currently the Chairman of the Chilean Committee of Museums, ICOM Chile, focused on national and international networks among museums.

Victoria Giraudo (Argentina) Bachelor of Fine Arts and curator. Since 2010, she is Head of the Curatorial Department at MALBA, the Buenos Aires Museum of Latin American Art, where she is also a member of the Artistic Committee, and Representative and Treasurer of the MALBA Foundation Board of Directors.

Alfredo Jaar (Chile) Visual artist, architect and filmmaker who lives and works in New York. He has made over 70 public interventions around the world, and more than 50 monographic books about his work have been published. He received the Guggenheim Fellowship in 1985, the Mac Arthur Grant in 2000, the Chilean National Arts Prize in 2013, the Hiroshima Art Prize in 2018 and the 2020 Hasselblad Photography Award.

Daniel Slater (England) Head of Exhibitions and Loans at Victoria & Albert Museum, London. He was Head of International Collection Exhibitions at Tate, where he led the itinerant exhibits programme in collaboration with various organisations at a global level.

The Editorial Committee of Centro Cultural La Moneda is composed of a multidisciplinary team and has among its functions to review and approve all the proposals and contents for the exhibitions, publications and outreach activities carried out by the Cultural Center, in addition to ensuring the quality of its programming.

Centro Cultural La Moneda was inaugurated on January 26, 2006 as a great space for culture, designed to engage the attention of diverse audiences at a central location of the civic life in Santiago, Chile.
See more

This memoirs contains the main milestones, advances and guidelines that motivated our work throughout the year.
See more